A Story about Swim Parents: In Hindsight

Home/Blog/A Story about Swim Parents: In Hindsight
Previous Next

A Story about Swim Parents: In Hindsight

I was blessed to have had a career in swimming which allowed me to travel the world and most important, to obtain an education that may have been out of reach had it not been for the financial support from Arizona State University in exchange for my skills in the pool. My swim career did not get off to a promising start. I cried at most lessons, faked illnesses so that I could miss workouts as a young swimmer and ultimately left the sport during my freshman year in high school to pursue a short-lived career as a road cyclist. How I ended up making a U.S. National Team and swimming in two Olympics is as much about perseverance as it is about patience. This post is written in hindsight about the way my parents persevered through a swimming career that should have ended many times over.

My brothers and I are second generation Americans. My parents immigrated to the States from Ecuador in their 30’s. My mother, a high school graduate, would end up working at a place where she worked with sheet metal (not sure exactly what she did) and would later go on to work the graveyard shift at a cemetery (no pun intended). My father, who did not graduate high school but has a PhD in street smarts, worked ramp at Western Airlines at LAX. Ramp is a fancy name for the guys that unload the baggage and sanitize the plane in between flights. We lived in Los Angeles, Watts and South Gate to be exact. There were four boys, mom, dad, a nanny and a dog in our family.

We should have never been swimmers. Neither of my parents were swimmers and if it had not been for a 2nd cousin who excelled at the sport, we may have never ended up being swimmers. Jorge, my 2nd cousin, swam at the 1972 and 1976 Olympic Games and ended up getting 4th in 1976. Just shy of the elusive bronze medal and had it not been for the Americans having three entrees per event (each country can only enter two athletes per event in todays Olympics) he would have achieved the unthinkable. Jorge was close and the country of Ecuador would have to wait until 1996 to obtain its first medal.

My parents, as 1st generation Americans would have to learn the language and culture all while raising four boys in a country that at the time, was not as accepting of Latino families as it is today. It was only after our car was set on fire in South Gate by gang members who were soured by my older brothers’ decision not to join their gang did my parents decide that enough was enough and ended up moving our family to Mission Viejo. That was in 1981. Although this move was great for the four boys, it created more chaos and uncertainty for my parents. My parents would have to drive a combined 180 miles round-trip per day to and from work. This forced us to take “Dial-a-Ride” to swim practice, accompanied by our nanny. Her job was to make sure that we got to school on-time, got home in one piece, didn’t get in trouble, ate and made our swim practice commitment. We, the boys, were the reason that my parents were “displaced” from what little they knew about this country and I learned at an early age that we could not let them down.

Swim meets were a real treat. On many occasions, I would hear that I was not meeting the expectations that they had set for me. I heard this from my coaches and never from my parents. As far as my parents were concerned, I was doing just fine! My parents never had expectations for us when it came to swimming. All they wanted was to keep their boys active, out of trouble and to keep them far away from the car burning freaks that caused us to move in the first place. This was their reality. This is the reason we swam.

My parents always supported us and do to this day. I only now realize why swimming was so important to them. It wasn’t because they had Olympic or scholarship dreams. It was because they needed to find a way to keep their four boys safe and out of harm’s way while they were out trying to make ends meet. It was the reason that they never pushed us too much while always teaching us that commitments come first. We had committed ourselves to this sport and if we did that, we needed to give an honest effort and if we did that, then that’s all that they would ever expect from us. It wasn’t about wins and losses or how much time we dropped in time from one swim meet to the next, it was about knowing their role and understanding the sport is about a team effort, where the coaches coach, swimmers swim and parents cheer and if the roles are clear, then that is the best formula for success.

My brother Robert and I swam in college as scholarship athletes, and if there is one thing that I can tell you is that my parents perseverance and patience, no matter the outcome, played a big role. We were also blessed to have committed coaches that were just as vested in our success as our parents were. The formula for success was in place and thus, in 1998 I qualified to swim on the US National Team and swam in 2 Olympic Games.

I am lucky to still have my parents in my life. They are an inspiration to me and no matter how tough times get, I always think of the time when they were new to the U.S., not knowing the language or culture, having four boys to feed and having to drive 180 miles round trip just to make ends meet. Not to mention that on many days, my father worked overtime because he had a hefty mortgage to pay on our new home in Mission Viejo. All of this so that we could have a better life. 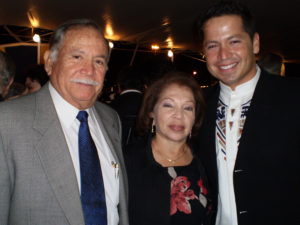 My Parents. To the right is my mom Ann and to the left is my father Eduardo

Life is a marathon where patience and perseverance are key and if this blog can help a family to understand the workings of age-group sports, then it has done its job. Remember, coaches coach, swimmers swim and parents cheer. Don’t ever doubt that formula because its worked for many and it will work for you as well.